Dilston Physic Garden’s 100 willow wood is a coppiced wood and ode to an essential medical drug. Coppicing is the oldest form of forestry – going back over 3,000 years. Young tree stems are repeatedly cut down and in subsequent years many new shoots emerge and after some years the coppiced tree (stool) is ready to be harvested, and the cycle begins again. Traditional uses of the cut wood include firewood, weaving, plant staking, broom poles, charcoal, baskets, fencing, tool handles, brooms and, most recently, production of biofuels. Coppiced trees live for hundreds of years – far longer than normal trees.

We have chosen the willow tree for our coppice because it is the most famous medicinal tree – giving rise to aspirin, one of the most widely used medicines in the world being used for pain, inflammation, fever and anti-clotting – protection against heart disease and stroke. Aspirin is based on the chemical salicin which is found in meadowsweet (Filipendula ulmaria) and willow bark and like its derivative aspirin (whose name comes from the old botanical name Spiraea ulmaria) blocks prostaglandins that cause pain and swelling. But willow bark does not cause internal bleeding since salicin in willow bark is absorbed in the duodenum rather than the stomach. More about willow bark can be seen below. 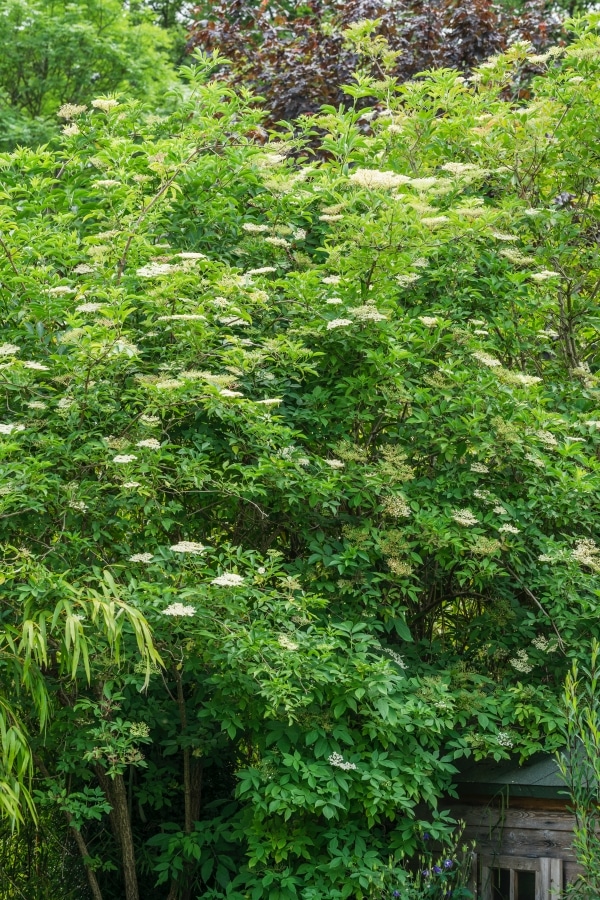 The hedge that stretches the length of the physic garden hosts trees such as elder, hawthorn, hazel, beech, blackthorn, dogrose and gorse, providing shelter to the plants from the westerly wind. A host of wild herbs such as garlic mustard, nettle, dandelion, wild lettuce and feverfew take up residence in the ground beside the hedging. Such trees and herbs have been a source of medicines for thousands of years.

Many fruit trees have medicinal properties – an apple a day! Others in our orchard include crab apple, pear, plum (both wild and cultivar), greengage, mulberry, damson, cherry, rowan, medlar and spindle berry. A magical tree at Dilston Physic Garden! An ancient Celtic custom (also Tibetan) is to tie a piece of cloth (cloutie) to the branches of a chosen magic tree (in this instance oak) while making a wish or prayer. As the colour of the cloth fades the elements take on the wish that hopefully may come true. Visitors to the physic garden take a coloured strip of cloth from the container beneath the tree, make a small donation in the box, and then tie a ribbon to the tree making a wish.

More about the willow tree

Native to Europe and western and central Asia willow thrives in damp regions near water and is one of the most vigorous in rate and type of growth – its sprouts from ‘whips’, stem cuttings and even logs. The silvery-white underside of the leaves gives the tree its name. Male and female are separate, catkins of the male being longer. Its grey-brown deeply fissure barked is used medicinally. Leaves and bark from other willow species (such as S. fragilis) are also said to be medicinal. It can be coppiced earlier than any other tree (3 rather than to 7-15 years) and is an ideal energy source being fast-growing, sustainable and carbon neutral.

The bark, used as medicine for joint pain, headaches, gout, lumbago, sciatica, inflammation and fevers for thousands of years, was first mentioned in Egyptian medical texts from about 1550 BC. Used since then by Greeks and Romans including the great Hippocrates – who recommended chewing it, drinking leaf tea, or mashing leaves with black pepper to drink with wine for relief of fever and pain (black pepper now found to enhance absorption of some plant chemicals) and by Pliny and Galen as an analgesic and anti-pyretic (reducing fever). This use of willow bark (and of meadowsweet that contains the same key chemical salicylic acid) led to salicin being isolated from willow bark in 1838 and synthesized in France in 1853. Aspirin (acetylsalicylic acid) was first made in 1897 by the Bayer Company. To the Taoists the tree represented strength in weakness.

What scientists say about willow

In humans: The few but controlled clinical trials on willow bark (as opposed to aspirin itself) show it reduces lower back and joint pain and treats osteoarthritis. One study suggests willow bark (standardized to 240 mg salicin) is as effective as the synthetic (non-steroidal anti-inflammatory drug) Rofecoxib when given for over six months to 114 people with lower back pain and is half the cost.

In the lab: Pain relieving and anti-inflammatory activity is associated with multiple actions such as prostaglandin regulation and the down regulation of multiple inflammatory mediators (like tumour necrosis factor, cytokines and COX2) – shown as good as, if not more effective than, aspirin in lab models of these markers and a better antioxidant than aspirin on a weight for weight basis of salicin.

Key chemicals: Although commercial willow bark extracts are generally standardized to salicin, other ingredients including other salicylates and polyphenols, including tannins and flavonoids, are responsible for the therapeutic effects.

Safety: In contrast to aspirin, willow bark does not irritate the gastrointestinal tract (salicin in willow bark is absorbed in the duodenum rather than the stomach), though its tannin content is high and theoretically it may cause gastrointestinal disturbances. Caution with anti-coagulants in high doses greater than 240 mg/day); at lower doses willow bark does not have the same cardiac and stroke (anti-coagulant) preventative actions of aspirin (and an extract dose with 240 mg salicin had no major impact on blood clotting). Caution allergic reactions in salicylate-sensitive individuals and, like aspirin, not for children – although the Commission E – the German equivalent of the FDA – states there is no evidence that willow bark preparations should be contraindicated in small children due to the risk of Reye’s syndrome since the salicylates in willow bark are metabolized differently to aspirin. Caution with other anti-inflammatory medicine as additive effects are theoretically possible. Salicylates are not advised in pregnancy.

Elaine Perry, Valerie Laws, and Nicolette Perry. 2021. Grow your own physic garden: Use the power of medicinal plants grounded in science.

Medicinal Trees A to Z at Dilston Physic Garden

You can find a downloadable A to Z list of medicinal trees at Dilston Physic Garden Medicinal Trees A to Z.