I have worked both paid and voluntarily at Harlow Town Park since 2017. Since my background is in landscaping and garden design, it was a great opportunity to get involved with this project in a public space. The park is a 164-acre site created during the 1950s when Harlow New Town was being built to re-house many Londoners whose homes had been destroyed during the war. The concept of the Town Park was very different to a traditional park because there were few fixed boundaries, and so it resembles more a country park in design with very few traditionally formal gardens. The park management were very supportive when I suggested we create a Forest Garden within the park. However, as is the case with many councils, funding for parks is limited so I decided to approach businesses for financial support. The response was good, especially as so many companies are now keen to show their eco-credentials and offset their carbon footprint. We raised almost £5000 and that gave us a great start.

We chose a quiet area of the park situated in a valley which has proven to be the perfect spot for a forest garden. Many years ago the area had been landscaped with a number of island shrub beds and paths leading through. Over time, the beds had become totally overgrown and consisted mainly of snowberry (Symphoricarpos albus). So we gradually cleared the beds and began a planting programme in one after the other fashion. Each of the beds offers different planting opportunities, one is in full sun on a sandy slope, others have part shade with more loamy soil and are protected at the bottom of the slope, while some are more exposed to wind. This has allowed us to grow a very diverse range of plants. We have a Mediterranean bed focused on herbs, and a bed with more tender fruit trees such as apricot, peach and even a kumquat. We have planted all the well known herbs, thyme, rosemary, sage, fennel, lavender and amongst these different varieties too, providing various scents, flavours or growth habits, eg. prostrate for ground cover, as well as santolina, oregano, winter savory, mint, hyssop, camomile and curry plant. We have also planted some tender plants in the Mediterranean bed including tea tree (Leptospermum scoparium), lemon verbena (Aloysia citrodora) and stevia (Stevia rebaudiana) and this will be their first winter so we will have to see how they fare. We were fortunate that there were already some mature trees of interest in this area. Our Mediterranean bed features a mature Corsican pine (Pinus nigra) and we have a mature Siberian pea tree (Caragana arborescens) in one of the more exposed beds. We have discovered all these wonderful advantages as we have gone along.

We started out with very limited knowledge of forest gardens, my knowledge and that of the other volunteers was based around ornamental plants and growing well-known fruit and vegetables. This was a whole new world to us and a very exciting one. We used Martin Crawford’s excellent books to guide us through* and two years on we feel a lot more confident and are now reaping the fruits of our labour, literally. One of the volunteers has a still and she has distilled numerous hydrosols from around the park and the forest garden. She has used them to make cosmetics and balms. We have made soaps using material from the park and we have assigned one area in full sun for dye plants and have had great fun dyeing fabric through the summer months. We have arranged two forest garden tours this year for University of the Third Age groups so that we can begin to inform people better about our work. 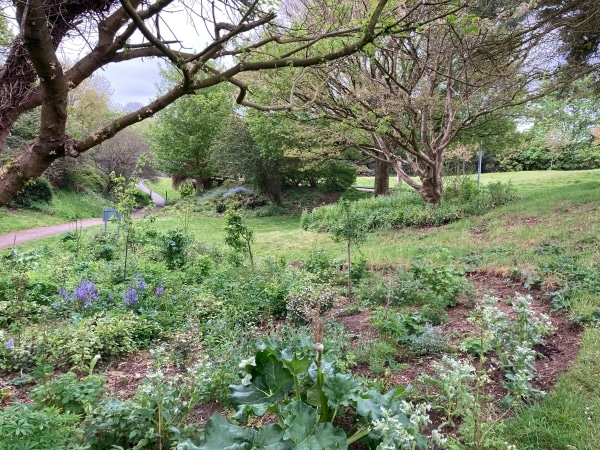 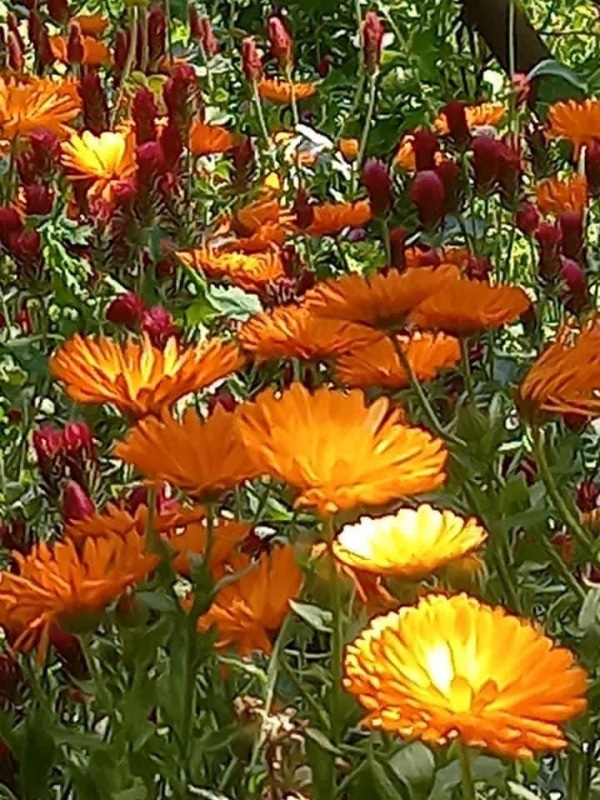 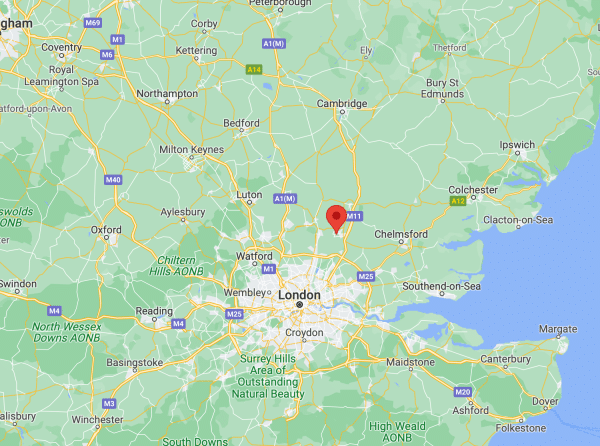 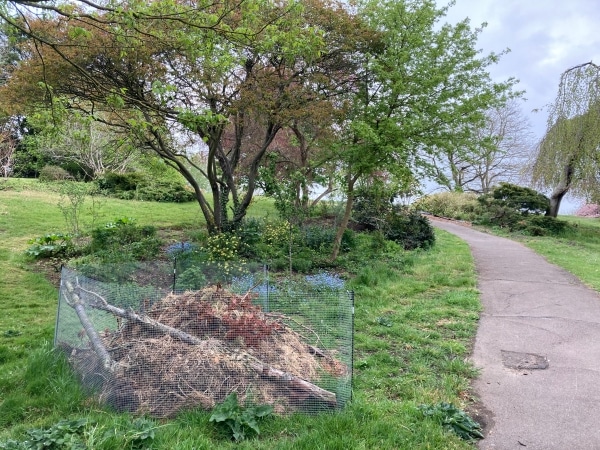 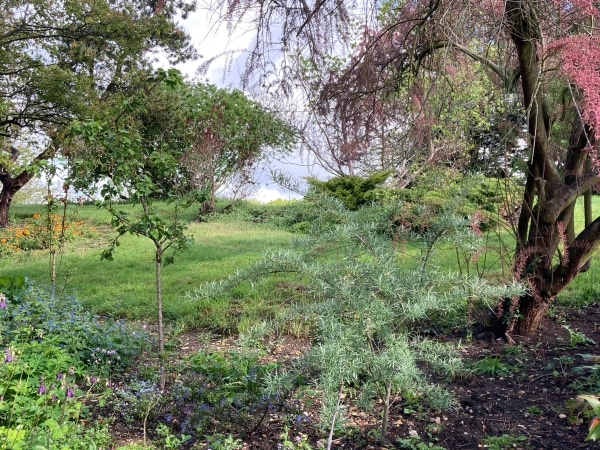 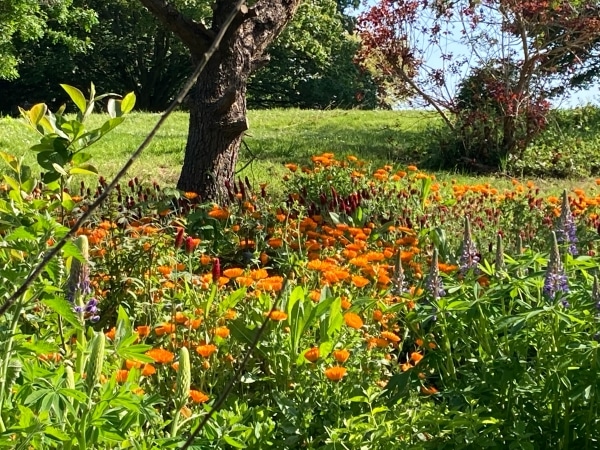 As the garden is situated in a public park we have had to provide signage to advise the public that, although the garden is full of edibles, which are freely available to all, harvesting is at their own risk as allergic reactions are always possible. Although the medicinal use of plants would probably be impossible for us to openly endorse at the park, it is an area that the volunteers would like to expand upon since most of what is edible is also medicinal in one way or another.

What we have grown

Just to give you a little more information, the caged heap that looks like a composter will actually become a ‘hugelkultur’, this is a raised bed built with decomposing organic material for moisture retention and other benefits. We started to build one last year but unfortunately the grass cutting team thought it was a pile of rubbish and removed it. So it is now protected with wire and we have continued to build it over the course of the summer with branches, sticks, turf and weeds and next year will grow annuals such as tomatoes, gourds and cape gooseberries in it. We have grown quite a few annuals this year within the beds including French beans and peas up some of the trees as well as tomatoes and spinach. We also have perennial vegetables such as kale and tree collards. We grow more unusual climbers such as cinnamon vine, hardy kiwi and hardy yam as well as several varieties of grapevine and thornless blackberries. The beds that receive more shade are planted mainly with currants, gooseberries, rhubarb and varieties of dogwoods (Cornus species). Those beds that receive more sun are planted with chokeberry (Aronia species), juneberry (Amelanchier), honeyberry (Lonicera kamtschatica), myrtle, fuchsia and sea buckthorn. Our trees include almond, Chinese date (Ziziphus jujuba), crab apple, fig, kumquat, medlar, nectarine, peach, pear, pepper tree (Zanthoxylum schinifolium), quince, strawberry tree and walnut.

Weeding has become less of a requirement as time has gone on since our groundcover is now suppressing a lot more of the unwanted weeds. We have used birds foot trefoil, geranium, deadnettle (Lamium) species, red and crimson clover, strawberries, both wild and cultivated, and vetch. In the more heavily shaded areas we have found varieties of trailing raspberry (Rubus) species have worked well, particularly on the slopes. All of the beds have been planted or sown with nitrogen fixers including Californian lilac (Ceanothus), broom (Cytisus), autumn olive (Elaeagnus) species as well as wild lupin (Lupinus perennis) throughout. Every tree and shrub that we planted received a little scattering of mycorrhizal fungi in the planting hole. We have no irrigation or water source available, so most of the plants have received little or no watering at the time of planting and are now left entirely to the elements. We were very conscious of the fact that because this is a public space it needed to look attractive too. As I hope you can see from the photos that, as well as being a productive edible garden, it also puts on a colourful display throughout the year.

Harlow Town Park is open all year round, has car parking and toilets, and is easily accessible by rail (Stansted Express). The forest garden can be reached from the Town Park main car park by taking the path up the hill behind the toilet block. If travelling by train, the Town Park Spurrier’s café entrance is just a 5 minute walk from Harlow station.

*Books by Martin Crawford can be obtained from the Agroforestry Research Trust.

Discovering medicinal trees in an arboretum